Sanne and Lemme are siblings in a traditional reindeer-herding family. The brother Lemme loves dirt biking and is eagerly looking forward to the new dirt bike track now under construction. In town, his sister Sanne meets a delirious man who babbles something incomprehensible about the ”devil’s children.”
After their father’s outburst at the dinner table about how recklessly people, including Lemme, are destroying the grazing lands that the reindeer need, just for the fun of a new dirt bike track, Lemme leaves in a huff. Sanne follows and hops onto the dirt bike behind him.
The teenagers disappear without a trace, and back at home their parents are consumed by grief and despair. Where are they, what happened? All that was found was Lemme’s dirt bike at the construction site for the new track.
In the novel In Between Worlds, the writer weaves together elements of contemporary reality and Sami beliefs to form a mysterious twilight world.
In Between Worlds is a translation of Máret Ánne Sara’s debut book, Ilmmiid gaskkas, published in the Sámi language in 2013 and nominated for the Nordic Council’s award for children’s and young people’s literature in 2014. The follow-up novel Doaresbealde doali came out in Sámi in 2014.
Máret Ánne Sara, a Sámi writer and artist with a unique contemporary artistic style, grew up in a reindeer-herding family. She now works and lives in her hometown of Guovdageaidnu in Northern Norway.

… I was so captivated by the story that I felt compelled to share it with a wider English-speaking audience.”  (Laura A. Janda, translator)

«…  Our Father, who art in heaven…” The shriek turned into a crowing sound and the myling came flying fast toward her, not circling around, but rushing right at Sanne. It stopped behind some bushes a few steps away, but the bushes were so thin that Sanne could see through them. It looked like a child, but its face was all blue. In places the skin had turned to soil. Scraggly plants were growing from its scalp and hanging down to its shoulders. A red komag-band was cinched around its neck, and the whites of its eyes were all red. It tried desperately to get closer, but couldn’t get through the bushes. It was clenching the branches of a dwarf birch and howling so that the earth trembled. …» 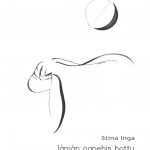